It was only recently at our little Park Rotana staycation that I had the pleasure of discovering the delights of Teatro, despite the fact it seems to be the favourite restaurant of almost everyone around me! But since then, a couple of weeks ago at the end of September they launched a new menu, so of course it’d have been rude not to go along and try it out 😉 Cocktails seem like a good place to start to me!

They’ve got a rather delicious cocktail menu to greet you, and if you can’t decide the waiters will helpfully suggest something for you to try. Dim Sum (and then some!)

The menu is the same in that it is extensive, and caters for both Western and a range of Asian tastes, though the items on the menu are all new, but with the same great attention to detail and quality as previously. There’s a great dim sum selection and what I can only refer to as more ‘authentic’ dishes. I loved the previous menu but for me, that’s the best way to describe it – the updated menu feels more authentic with the new arguably more ‘traditional’ additions of dishes including Malaysian Prawn Laksa, Thai Green Curry, Tom Yam soup, Kung Pao prawns, Goan Kingfish curry and the like. The sushi offering is still plentiful and even offers secret items that are not on the menu, but only to those in the know! After trying the miso soup (I love this stuff and it was a perfect way to start since I was feeling a bit under the weather!) and a couple of pan fried and steamed dim sum choices, we chomped our way through Kung Pao Prawns, Malaysian Prawn Laksa, Butter chicken, a selection of naans and as a noodle lover I couldn’t leave without having tried the Lotus Blossom – stir fried egg noodles with a choice of shrimp, chicken or duck. 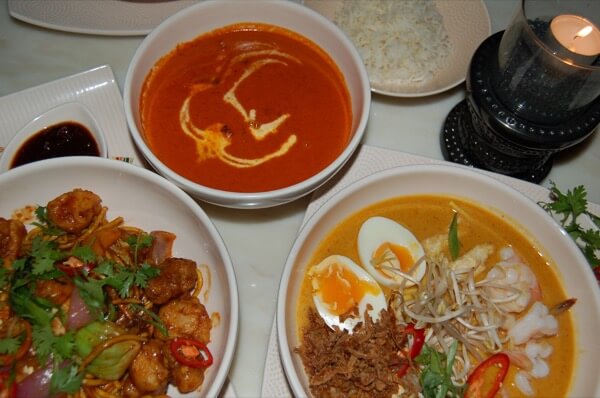 Mr. Arabian Notes pretty much demolished the Kung Pao prawns single-handedly and couldn’t stop raving about how good they were. As for me, my favourite was the Butter Chicken but the Malaysian Prawn Laksa was a pretty close second. In reality, we couldn’t fault anything we were served – the flavours were just delicious in everything. The hardest part in visiting Teatro is always in deciding what to choose!

Of course, we couldn’t possibly leave without finding out what had changed on the dessert menu, and whilst I’m a little sorry to see the Baked Hawaiian I enjoyed so much on my last visit is no longer there, there are plenty of choices to distract me from that! In the name of, ahem, research, we went with the recommended dessert from our waiter, the ‘Big Show’ which was quite rightly named as it turned out..! This thing is a true spectacle, and aside from that – it’s the best way to get a taste of lots of different items on the menu: Coconut crème brûlée, Green Tea cake (sort of like a delicate swiss roll), gelato, watermelon sorbet, banana wonton and a traditional Japanese dessert. Truth be told, I would normally see these items named on a menu and think ‘no, no dessert for me tonight’, but I won’t make that mistake at Teatro in future that’s for sure! To me, normally dessert just isn’t quite right if it’s not chocolate and fudgy or toffee and sticky, so whilst I might not usually try these things just by reading the name, I’m so glad I did, and possibly the most surprising thing of all was that the desserts I expected to like the least, were the ones I liked the most! As I said, dessert for me usually needs to be chocolatey and heavy to entice me so I wasn’t expecting to enjoy the traditional Japanese dessert but this was amazing! Such a light texture and really unusual – it was an unexpected pleasure that’s for sure.

And I’m a firm believer that fruit has no place in dessert (aside from perhaps the odd occasion where there’s also chocolate involved, then I might make an exception!), so Banana Wonton would have previously fallen way down my list, but to my surprise, I can only describe this as a triumph, a veritable triumph of a dessert. Who knew banana in dessert could be so good?! In fact, out of everything, this would quite likely be the dessert I choose when I visit in the future.

And visit again I definitely will… To check out the new menu there’s no better way than to get down there yourself, but for more info and a peek at the new menu click here to find all the details.

Teatro is housed inside the Park Rotana Abu Dhabi on the Khalifa Park ring road next to TwoFour54 and just in case I need to reiterate, it’s really bloomin’ good.