As a fan of Jumeirah Hotels and with a number of staycations with the brand under my belt, including my own wedding having been held at the Mina A Salam, I’ve long since fancied a little staycation at Jumeirah Etihad Towers. We had originally scheduled the break for Eid weekend, but sadly the toddler took ill and we weren’t able to go. Luckily for us, the staff were pretty amazing and instead of forfeiting the lot, allowed us to reschedule the package we’d booked for later in the year. That was a great start, as there’s nothing worse than being left with a bad taste in your mouth from terrible service, but during all the to-ing and fro-ing that went on with the rescheduling, I have to say it was pretty painless. We were certainly pleased with the outcome and able to remain excited about getting down there to spend our National Day long weekend in style. It may only be a few kilometres away from where we live, but there’s something about staycationing in a five-star hotel that still makes you feel a world away from home! Of course, that’s the idea anyway, and Etihad Towers ticked all the boxes for us – luxury, good food, beach, relaxation… Of course living locally we’ve visited the hotel numerous times before to eat, but never to stay over. And you’ve got to love Jumeirah, they’re really good at what they do aren’t they? Every member of staff we came across was friendly and helpful, and not only that, as well as evidently having received good training, they really seemed happy in their work. Now, Jumeirah Etihad Towers might not be everyone’s first choice, as there are hotels with more impressive beaches around, but for us – I loved every minute of our stay. And as for the beach, it was perfect for us! I have heard criticism before from people who complain that because of the surrounding skyscrapers that the beach falls into the shade in the afternoon. Well, this is true, but frankly speaking for me with such pale, sensitive skin, this is a good thing! I spend half of my life trying to cover up from the sun, so I loved the fact that I could relax on the loungers and swim in the late afternoon without worry about my own skin or that of my not quite two-year old son. And to be fair, it’s pretty late in the afternoon that this happens, after 3pm or so the shade slowly creeps further along the beach, but for the rest of the day the sun worshippers can’t complain. We had the best weekend at the hotel. We had a lot of fun playing in the shallows, spotting and chasing the minnows. And whilst it’s not the biggest beach around, despite it being a busy holiday weekend the beach and water never felt busy or crowded at all. The most action and excitement was on the Friday with the sound of the chatter and the live music from the Nahaam brunch wafting over the beach and pool area – it also made for some excellent people watching 😉 Aside from the beach and pool areas providing plenty of fun for us all, and the service being excellent, I’d even go as far as to say almost flawless, it was that good – it was the little touches that also made a difference. The room was spacious and beautifully decorated, daylight flooded in through the floor to ceiling windows and from our position on the 51st floor, despite being located in a prime position of downtown Abu Dhabi it was noticeably quiet… Incredibly peaceful and quiet in fact, something we loved about the place. And speaking of little touches, the restaurants even had special kid sized cutlery with easy grip handles and unbreakable tableware – you’d think that would be a given at any five-star hotel, but despite all the travel we do, this is something we rarely find, with baby tableware either not being provided at all, or with a makeshift plastic takeaway plate and spoon given instead.

I also loved the arrangement of the bathroom amenities to reflect the shape and positioning of the buildings themselves – how cute is that?! We pretty much lazed around on the beach for most of the weekend, and when we weren’t doing that we were eating..! Since it was National Day, we decided to book in at the Observation Deck at 300 for afternoon tea and with a hope of getting a decent view of the annual display by the Al Fursan aerobatic team of the Air Force (excellent planning!). The afternoon tea is a lovely thing to do, and although the food is good, with 360° views from the 74th floor and the vantage point of 300 metres above the city, the views are really what everyone comes for.

We had booked afternoon tea for two, but one is easily enough for two people – even with the toddler helping out, grabbing fistfuls of sweet treats, we still couldn’t finish it all! The Observation Deck at 300 is also a great place for kids, mainly due to the way the tables are set out. There’s lot of room around each table to walk around and ledges to sit on, or stand right next to the windows without being a nuisance to anyone. If you have kids who don’t want to sit still (does anyone have kids who do sit still?!), it’s a good option as there’s also a look out area complete with fixed binoculars and even a little step for those who aren’t quite tall enough to reach. If you go late in the afternoon you’ll also catch some amazing sunset action. 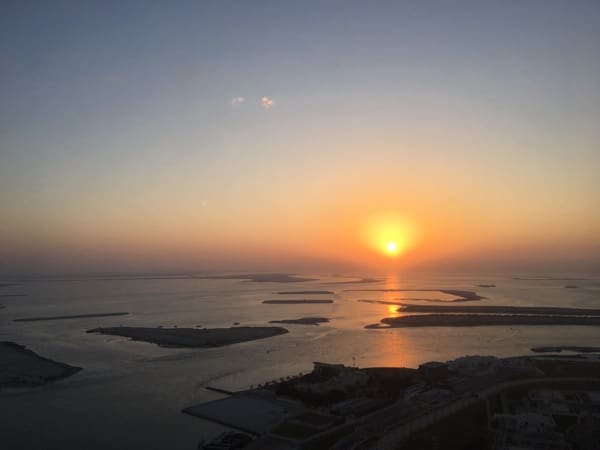 During our stay we also ate dinner at Ray’s Grill, which turned out to be an excellent, if accidental plan for catching the National Day fireworks! And even better than this, we had the toddler with us, and because I had mentioned this when making the booking, unbeknown to me until we arrived, we were placed in one of the private dining rooms! Not only did we feel super special and have a great view along the corniche, but we didn’t need to worry about the toddler causing mayhem. Thankfully he slept peacefully in his pushchair through the whole evening, but still, it made a rare evening out all the more special for us. I’ve heard several people say they consider Jumeirah Etihad Towers to be one of the best, if not the best hotel in the city, and after having spent three nights enjoying their hospitality, I find it hard to disagree. Not only does the range of restaurants and bars make it an excellent choice – you’ll never get bored – but they just have such incredible attention to detail, and that really makes all the difference.

We had a truly memorable weekend at the hotel, and though it was only down the road it really gave us a very relaxing break – speaking of which, I had been itching for ages to pay a visit to the Talise Spa and although the appearance and feel of the spa itself is nowhere near as impressive as the one at the Madinat Jumeirah in Dubai (high expectations, much?!) the actual massage treatment was wonderful and the massage bed was definitely one of the most comfortable I’ve been on in the city.

One thing I can say without any doubt is that here in Abu Dhabi, we definitely need more Jumeirah in our lives…

Where to eat in Abu Dhabi: places I spend my money