It seems I’ve managed to fall a little bit in love with the Hyatt Capital Gate hotel. After all my time in Abu Dhabi and never having been there until now, I have finally come to the realisation that this really is something quite special in the city. And after discovering they had a fabulous spa too, I was hooked. So the other weekend, desperately in need of a bit of a break from life I took the opportunity to check myself in for a cheeky overnighter, all on my lonesome to relax and catch up on all those things I’ve not had the time to do with a toddler running around at home!

I was pretty excited about he prospect of a weekend away it has to be said. And it’s also been a hotel that has been on my list a long time, mainly really for the curiosity factor with it being such an iconic building on the horizon of the city. The hotel reception is located on the 18th floor, which is a significant number for the hotel with the building famously inclining at a world record breaking 18°. And I couldn’t help but notice, as soon as you step into the hotel foyer on the 18th floor, that it feels as though you’ve been transported far away from the city, you’re immediately greeted with calm sophistication, and there’s a real sense of peacefulness about it. It’s also quite an impressive foyer if you take a minute to appreciate it. The extraordinary structure of the building is also visible inside, and I can’t help but marvel at the sight of this, and the strength of the building reflected all around in the perfectly polished floors. To reach the guest rooms there’s another lift again, separate from the lift that brings you to the hotel reception which ensures privacy and security for hotel guests. And on exiting the lift you can’t help again but to be impressed by the dominating structure of the building that forms a central feature. As for the rooms themselves, it’s fair to say they are more than generous. I loved having all this space to myself to knock around in, but there’d also be no worries about a family falling over each other or where to store the luggage. And the bathtub comes with a bit of a view all of its own! I do love me a good big bath with a view! And of course, up on the 19th floor where the spa is located, you may be surprised to know there is indeed a pool. If you’ve seen the building from the outside, you might wonder how they managed to engineer a pool that’s basically perched on the side of the building, but manage they did. It’s a strange feeling being so high above the city and not on a rooftop, but the views are fabulous and strangely the noise from the road isn’t particularly noticeable. There’s a certain humorous contrast about being able to sit back and feel so relaxed right above one of the main thoroughfares of the city. 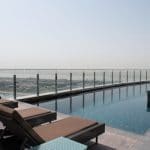 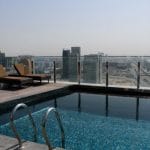 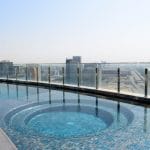 One of my favourite parts of the building is actually from within the spa area, at the point where you’re able to look all the way up to the helipad on the roof and where the 18 degree incline is really most noticeable from the inside. After all this admiration of the various hotel features, it was time to go off to Friday brunch at the restaurant, 18°. With unmatched views across the capital paired with the unusual design, it really is something to see. And the food wasn’t half bad either. Kirsty from Life in Excess joined me for brunch and we spent the afternoon chatting away and washing everything down with a few cheeky beverages (well, what else is brunch for?!).

There was the usual buffet brunch layout to help yourselves from, though with the notable inclusion of Yorkshire puddings and gravy to accompany the choice of roasts – in my book that’s worth going for alone! There’s also an a la carte menu to choose from a number of main courses, though thankfully they aren’t full sized or I’m not sure how you’d ever fit it all in! I ordered the scallops and chorizo while Kirsty sampled the beef tenderloin, both of which were a highlight of the meal. Though speaking of highlights, the one thing that has really stayed with me is their ice cream… the cookies and cream especially was to die for and frankly speaking, I’d gladly make a visit to the hotel just for that! 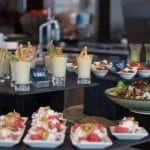 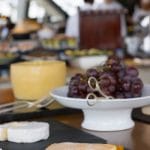 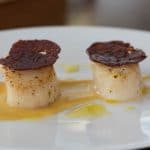 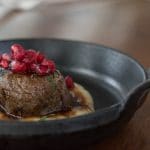 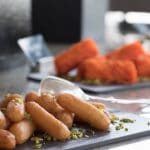 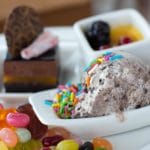 At the far end of the the restaurant, there’s also a bar and more comfortable seating area, still with the same enviable views across the island.

And although I hadn’t been a patron of the hotel until recently, I do have a number of friends who love this place, and of course now I can see why. The hotel also hosts what is reputed to be one of the best cheese and wine nights in the city, as well as a newly launched afternoon tea. After we’d stuffed ourselves silly at brunch, we weren’t quite finished for the day so we moved outside onto the terrace for some sundowners where the view is equally impressive. 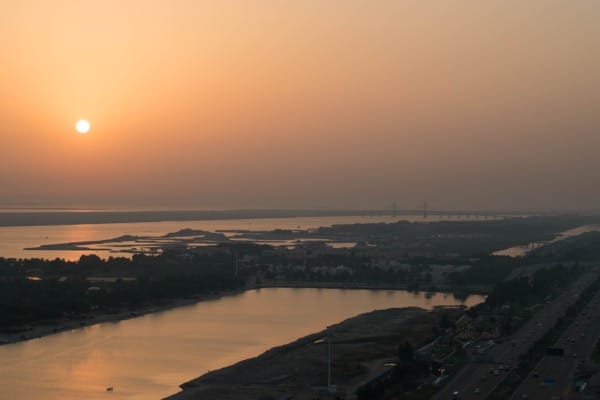 I hadn’t imagined that I might ever stay at this hotel, but I’m so glad I’ve had the opportunity. I had an amazing weekend off from my life as a mum to recharge my batteries and enjoy being able to have an uninterrupted conversation with a friend! The hotel does attract a lot of business guests which isn’t surprising due to its proximity to the convention centre (and how well the rooms are geared towards the needs of business travellers), but there’s also something captivating and so special about this hotel that has really left an impression on me. Described on the website as a ‘luxury boutique hotel’, I’d have to agree. The level of personal service and friendly nature of the staff along with the uncommon interior structure and design ensures its place as such, and as something quite unique in the capital.

Visit Hyatt Capital Gate to find out more and book.