With post-holiday blues weighing heavily on us since we came back from Berlin, we decided there was only one thing for it… a cheeky mini break to chase those blues away! So off to Dubai we packed ourselves for a relaxing weekend away at the gorgeously recently renovated Manzil Downtown Dubai. After an early drive up to Dubai, a brief spot of shopping at the nearby Dubai Mall and a peek at the Aquarium for Baby Arabian Notes (he was a bit underwhelmed I must say, though he is only six months old so I’m sure these things will grow on him!) it was off to check in. The reception area felt really calm and welcoming, none of that rush and bustle that you get in some places. And we were greeted by name as soon as we walked up to the check in desk, I’m not sure how they knew who we were, perhaps we were the only ones staying that weekend with a baby – but it was impressive all the same! And it’s not your imagination if you think you can hear birds in reception… round the corner are two large bird cages which house the sweet-songed culprits! And as I mentioned already, the hotel was extensively renovated at the end of last year so of course the rooms are well equipped and lovely. The hotel is actually only rated as a four star but to be honest, to look at it I’m not sure you’d realise that – the bedroom and bathroom were as nice as some five star hotels we’ve stayed in. 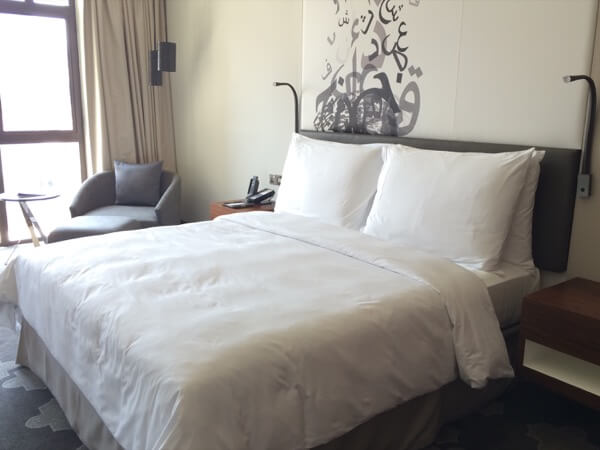 The room was also very comfortable, so it was hard to drag ourselves away for the afternoon, but with the lure of lunch and a dip in the pool to cool off we somehow talked ourselves into it 😉 The pool is in a really pleasant setting, and despite appearances and being in the heart of Downtown Dubai it doesn’t feel busy or overlooked at all, in fact quite the opposite. It’s a bit of an urban oasis! There’s a small covered area to retreat to for lunch, drinks and snacks, and happily Baby Arabian Notes chose the perfect timing for his nap so we were able to eat and have a cheeky beverage in peace, hurrah! The rest of the afternoon was spent splishing and splashing around the pool practising some of the swim techniques Baby had learnt at his aqua classes and generally just having a bit of a giggle before retreating to the room for a much needed nap (for me, not baby this time!). And before we knew it was time to eat again, so off we went to The Courtyard for the evening. The Courtyard is a lovely outdoor er, courtyard, believe it or not that is beautifully lit with lanterns and candles for the evening. It was also really busy – clearly it’s a popular spot to while away the evening over dinner and shisha. The only thing was that unfortunately, we hadn’t realised kids aren’t allowed outside so we couldn’t actually dine in the courtyard itself, but after a bit of umming and ah-ing we were offered a table just inside the doors, in Boulevard Kitchen which offers the same Lebanese menu. As is often the case when it comes to ordering Lebanese food, we got a bit excited in the ordering – we always want to try a bit of everything and tend to get carried away with the range of options! Everything was good quality and I think we scoffed the lot. Take note that the lentil soup is an absolute must, along with quite possibly the best cheese rokkakat I’ve had in a very long time. Delicious! We enjoyed our little mini break in the city, the only thing was that it wasn’t really long enough! If you’re looking for a place to pop up to Dubai and stay for a shopping trip or catching up with friends and the like, you certainly can’t beat the location. You might even get the chance to play hide and seek with HRH Sheikh Mo, as we did from our hotel window 🙂 Inside the Louvre Abu Dhabi