Billed as the ‘original hippie ice cream’, Emack & Bolio’s has made the journey all the way from Boston, USA and has opened its first store in the UAE, here in the capital.

Emack & Bolios was founded by Bob Rook, a music lawyer when back in 1975, he was working pro bono for the homeless, human rights and anti war demonstrations alongside representing big names in the rock n’ roll world. The hunt for late night snacks proved fruitless since everything closed by midnight. Bob decided this was a situation that needed to be rectified so after renting a basement and buying a commercial ice cream machine, Bob began making ice cream – his friends and rock ‘n roll stars all playing a large part in influencing the creation of many of the unique and unusual flavours. So why Emack & Bolio’s? Bob was working with two homeless gentlemen on a pro bono basis at the time, and they requested that the shop be named after them, and there you have it – delicious, socially responsible ice cream began. 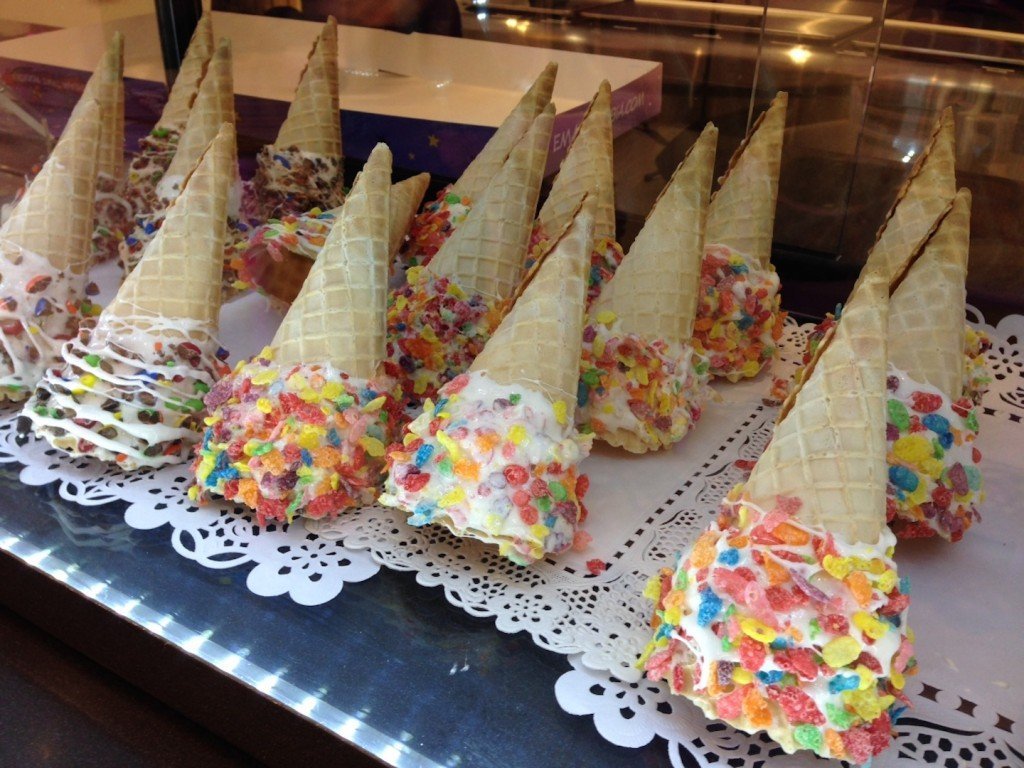 Once you’ve picked out your ice cream flavour there’s also the decision of whether to have it in a pot or cone… and what a range of waffle cones there is to choose from! Marshmallow dipped cone with fruit loops, jelly tots or rice krispies perhaps? Or maybe a little something from the handmade chocolate and fudge counter perhaps? I plumped for ‘Cookie Monster’ as I am a sucker for ice cream that contains cookie dough… gotta admit to being partial to the odd Oreo too! Mr. Arabian Notes, being a coffee lover went for the ‘Beantown Buzz’. It also wouldn’t have been right to leave without trying my all time favourite – mint choc chip, so I couldn’t resist a taste of the ‘Grasshopper pie’ which was definitely my favourite of the day – mint, chocolate and Oreos? By blending three of my favourite things you just can’t go wrong, it was a surefire winner. Who fancies an ice cream pizza?

There’s all sorts of house specialties on the menu from the ‘Emack Attack’ which features a whopping 28 scoops of ice cream drizzled with homemade fudge and whipped cream… sounds amazing, but I’d best get some friends round to try that one I think. Or what about an ice cream pizza perhaps? Built on a brownie base with vanilla ice cream, fudge and marshmallow, finished with the signature chocolate peace sign and topped with various sweetie treats.

If you love ice cream (and who doesn’t?!), it’s an ice cream treat with a difference that’s well worth a visit. Peace, love, rock n’ roll and ice cream – what more can you ask for?

Emack & Bolio’s is now open at Dalma Mall, on the second floor.