Cryotherapy… A new Cryo Health facility has recently opened in Abu Dhabi and not knowing much about it, I decided it might be fun to give it a go and find out more…

The new Cryo facility is located at the Abu Dhabi Country Club, and if I’m honest, I thought it was probably going to be just a little Cryo chamber located down the back of the spa somewhere in a poky little room, but – I couldn’t have been more wrong. Not only is it NOT in a poky little room, but it has its own custom built facility on the grounds of the country club, and pretty impressive it is too… I have to say I was relieved, and to walk in to the reception certainly made me feel more comfortable walking into what was essentially the unknown. I was already feeling nervous, not least due to the recent snap of cold weather and me being reminded one particularly chilly morning when stepping out of the shower that in actual fact, I left the cold of the UK for a reason… I really don’t like the cold! So, armed with the knowledge that I was about to step into a very, very cold chamber all in the name of health and beauty, I was definitely a little uneasy. The staff were super helpful and really put me at ease. Friendly and knowledgeable, the check in process was pretty smooth and quick and before I knew it I’d been shown to a lovely bright changing room with some rather unusual attire to change into… it was about to happen! So yeah, you have to protect your bony bits and shins are bony indeed, hence the long socks. Of course shoes are needed to protect those little toes too, though I’m not entirely sure what those lovely blue shorts were in aid of. Modesty certainly, though they perhaps have another more technical use also. But there you have it, the garb is not particularly attractive, though it is entirely necessary I’m afraid.

But hold on, let’s back up a bit for those of you who are still wondering (pretty much as I was), what on earth this Cryotherapy business is all about. What is it, and why do people do it?

Well, basically, you step inside a chamber called a Cryo-Sauna and get blasted with cold air, er, VERY cold air of around -140°C, yes MINUS 140°C. And that’s pretty much it – you stand there for about three minutes, freezing your bits off… But hang on in there with me, there is method in this madness. People don’t just do this because they like the cold, or because they’re nuts – there are actually renowned health benefits of putting ones self through this process…

Firstly, it’s pretty good for athletes as it helps muscles recover quicker, is great for assisting with stiffness and problems associated with chronic injuries, it helps to boost the immune system by flushing out toxins and so much more. But, as most of you will know, I’m no athlete, so what on earth was I thinking?! Well, it’s also good for us everyday non-athletic folk too. Cryotherapy can assist with weight loss as it boosts the metabolic system and claims to burn up to 800 calories per treatment, help increase collagen production (hello looking younger), reduce cellulite, eliminate water retention, improve circulation and generally believe it or not just give you an all round good feeling – or so they say… 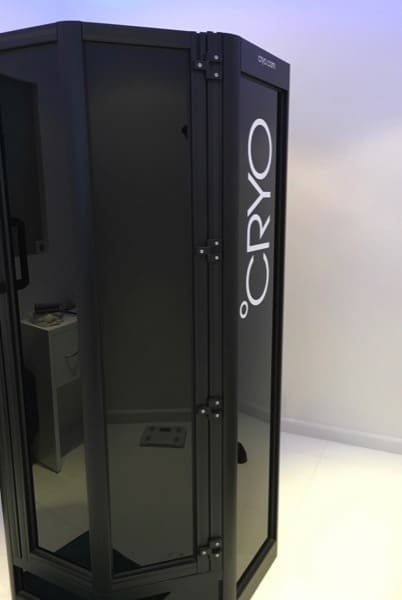 So, here goes. I stepped into the treatment room and was faced with this big black cubicle, the Cryo-Sauna itself. And after a quick blood pressure check (it was a little on the high side on account of me being rather nervous!) and a run down on what happens next, it was go time. So here I am… looking surprisingly happy about it all considering I’m standing in a chamber wearing next to nothing aside from a pair of rubber boots, some thick socks, gloves that resemble hard-core oven mitts and some spa style disposable undies to protect my delicate bits. It really wasn’t anything like I’d expected. Of course it felt a bit chilly, but I was told to march on the spot and keep turning in the chamber which helped, and the whole time I was chatting away to my therapist (who stays in the room for the duration) which I think really helped distract me.

But, the proof is in the pudding – for my first treatment I was assigned level 2, and you can see the temperatures of the machine for yourself from the image below… brrr! Just as I was starting to feel pretty chilly, I asked how much time was left – thinking that three minutes would no doubt feel like an eternity in such cold temperatures – and I was fully expecting to be told only 30 seconds had passed, but in fact my full three minutes was complete! 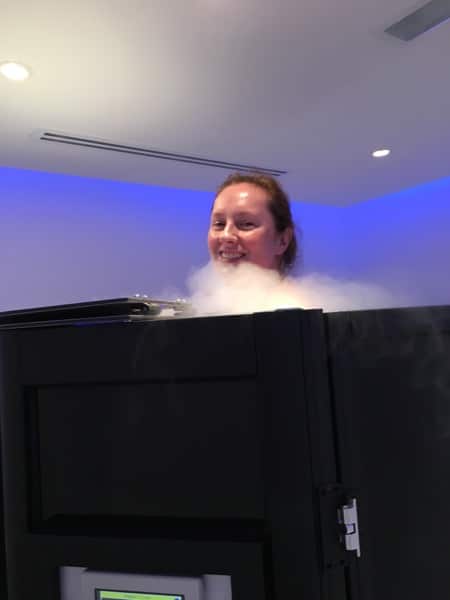 I was definitely glad to step out of the chamber though it really was nothing as terrible as I’d been expecting, and I’d even go as far as to say it was fun! I felt very relaxed (which was not an effect I’d been expecting), and also actually quite happy and uplifted. Cryotherapy is known to release endorphins for the feel good factor, and prior to the treatment I didn’t really expect this to be a side effect, but what can I say, it was and I felt good!

I was told that I might feel also a bit hungry in the hours after the treatment due to the metabolic boost I’d received, and that I might find I sleep better that night. Pretty shortly after I arrived back home I noticed I was very hungry, in fact I think I felt like wanting to eat everything for a good couple of days afterwards (though of course I resisted as best I could!). So, results… I really enjoyed the treatment and it certainly seemed to give me a metabolic boost, judging by the hunger I felt after and I did feel a little more slender and slinky and I also slept well that night too.

Would I do it again? Yes, I think I would, especially for a little boost to help get out of a weight loss plateau or treat an injury. I went for the Whole Body Cryo treatment though there are other choices too, from facials that promise to help improve the appearance of the skin and diminish blemishes, and targeted Cryo treatments that treat specific problem zones for cellulite and improve circulation. I quite fancy seeing what their facial can do.

Prices start from Dhs350 for one session of three minute whole body cryotherapy. Find out more on the Cryo Health website or give them a call on 050 404 1120.