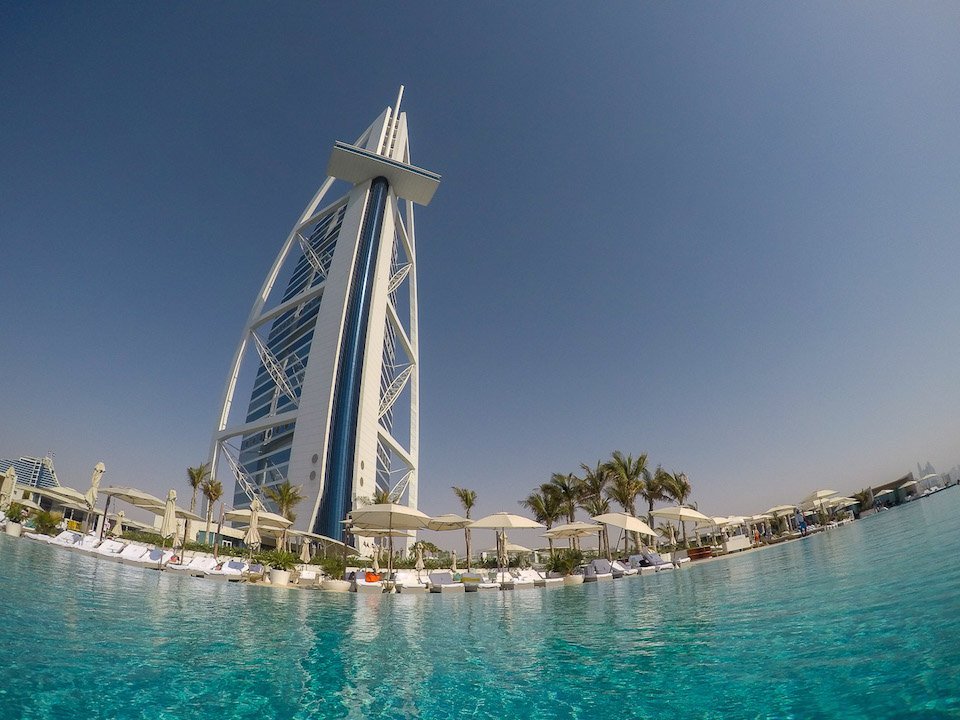 It’s a common one on the bucket list for UAE expats, but over this year’s Eid break we finally went for it and spent the weekend at the Jumeirah Burj Al Arab in Dubai. Wondering whether it’s worth it? Here’s what we thought of what is often billed as the most luxurious hotel in the world.

It’s certainly a statement building, isn’t it, the Burj Al Arab. Iconic in its exterior design and well, I’m not exactly sure what the words might be for the interior… Opulent is one such word that comes to mind, though depending on your taste, gaudy could be another! I mean it’s not to my taste, but even so there’s no denying that it is hard not to be impressed as you enter the place. Although there are reception desks in the foyer, check-in is done in your room (or suite, since it’s an all-suite hotel), so we were escorted by a guest services manager to our room, who explained all the facilities on the way.

And I’d read that even the smallest of suites wasn’t that small, each being configured across two levels, but there was no preparing us for the room that awaited.

Inside the door was a grand entrance hall (of course!), with a sweeping staircase leading to the top level which housed the bathroom complete with enormous shower and separate spa bath, a large dressing room and finally, the main bedroom. And on the ground level, was a large living room and lounge area (with sofa bed for the kids or extra guests), a bar, office area with desk complete with full desktop computer and printer, and a small guest bathroom. Not sure what they were thinking when they installed the mirrors above the beds, it’s not exactly a touch that says high-end and luxury to me, but each to their own, eh?! Every floor in the hotel also has a dedicated butler to deal with any requests you may have at any time.

The terrace and pool area of the hotel was an after thought, having only been added to the hotel in 2016, but it’s a welcome addition. The terrace houses two large pools (one chlorine and one saltwater), and a shallow kids pool which is strangely separated quite a distance from the other pools making it a not particularly attractive or convenient option for families. But kids are allowed in the other pools anyway, so the best bet is to just swerve the kids pool altogether. The saltwater pool closest to the sea also has shallow areas meant for sun worshippers to lounge on sun beds, but the pool was never very busy, even over the usually packed Eid break (and the hotel was at 100% occupancy during our stay) so these areas actually worked perfectly for kids that wanted to splash about in the shallows and play with water toys.

We spent most of our time in the salt water pool, but it was fun to switch every so often and go to the other pool, particularly as it has a shaded swim-up bar in the centre!

There’s plenty of loungers to sit poolside, you can even choose to sit in a special ‘beach’ area to get the feel of the sand in your toes! But of course being the most luxurious hotel in the world, it doesn’t end there. Each side of the terrace is lined with private air-conditioned cabanas, though there is an extra charge for these. To be honest, I didn’t really see the point of them. I suppose for famous or local guests perhaps the extra privacy might be welcome, particularly with the cabanas that look out over the sea as they’re not at all overlooked. And perhaps if you’re not used to the heat here it could be good to have the option to cool off, but we were just happy sitting at the pool’s edge and dipping in whenever we felt a bit warm.

Regardless of your preference, I have to say that I fear the service on the terrace has ruined us for life! Before you’ve even decided where to sit, a friendly cabana boy gently introduces himself and offers whatever assistance you need including chilled welcome (non-alcoholic) shots and a cooler bag filled with water, facial cooling spritz and cold towels. We found the service to be just about perfect – always attentive and efficient but never intrusive. I’m pretty sure you could ask for almost anything and the answer would never be no. Whilst there are a lot of five star hotels in the UAE, I can honestly say I’ve never been to any other hotel here who got it quite so right – but that’s exactly what you’d expect from the Burj Al Arab isn’t it?

For those who cannot bear not to dip their feet in the actual ocean, while the Burj doesn’t have its own private beach, guests are free to use the Summersalt beach club at Jumeirah Al Naseem. We did pop down there to try it, and although the beach and water is lovely, it’s much busier there and we found the service to be very slow and difficult to catch the attention of the attendants (I told you the Burj ruined us!). So a change is as good as a rest they say, but it was an easy decision to get quickly back to the good life on the terrace at the Burj for us!

The Talise Spa at the Burj is also a must do. I’d say its hands down one of the best spas I’ve ever been to (and I do like to check out a good spa!). If I lived in Dubai I’d seriously think about forgoing any other spa and only ever coming here. The facilities were spectacular, in every sense. Surprisingly, given the palatial decor throughout, the treatment rooms were quite minimal. Still beautiful, but definitely unexpectedly plain. And of course, in terms of the actual massage, the therapists must be the best of the best. It was a truly wonderful experience, and though all of this comes at a suitably luxurious price, I’d have to say it was absolutely worth it.

Our stay was spectacular, though it wasn’t completely without any hiccups. There was a couple of mix ups in information given to us from the suite butlers about restaurant availability and opening times, though the guest services staff on the main desk were able to clarify everything and sort the details of our evening for us fairly simply.

But the burning question is – is it really the world’s most luxurious hotel? My honest answer is that in many respects it absolutely is. The level of service by the pool for example. And in the fact that it’s probably the most luxurious hotel room you’ll find without booking a presidential suite elsewhere! I think though, with such renowned grandiose claims about a place it immediately sets guest expectations incredibly high, which can almost certainly make them very hard to meet. My biggest disappointment about our stay was breakfast. There were two choices in different restaurants – an Asian buffet and an International buffet, but in my opinion, they were both a little disappointing. The Asian buffet was the larger of the two (clearly an indication of the regular hotel clientele) and let me be clear that the food was exceptional – our complaint here was that the chefs seemed to struggle to keep up with demand and many of the dishes were left practically empty. In fairness though, when we raised this, the chefs promptly prepared fresh plates for us and delivered them to our table, so we cannot complain too much! As for the international buffet, well, it was much smaller than expected and whilst it had almost everything you could want for, I cannot deny I’ve definitely seen more impressive breakfast buffets elsewhere.

A weekend at the Burj Al Arab was definitely a bucket list stay for us, and I’m glad we did it. We had an incredible time and it was a stay that we’ll undoubtedly never forget. If you’ve been thinking about doing it, I’d say it’s one that should be done while you’re here. It’ll cost you, but it’ll be worth it! And speaking of cost, UAE residents can take advantage of special resident rates (the cheapest rates are during the hotter months), though we found that by booking ahead we found an even cheaper rate so it pays to be organised!

As with all the other Jumeirah hotels in the neighbouring complex, free access to Wild Wadi Waterpark is also included throughout the duration of your stay. While the hotel does have a kids club, it’s really for very young children and babies, but families with older kids have the option to use the Jumeirah Beach Hotel kids club. In fact, as a guest of the Burj Al Arab, you pretty much have access to most facilities throughout the whole Jumeirah complex if you want them, but why you’d stray from the poolside service on the terrace I don’t know! 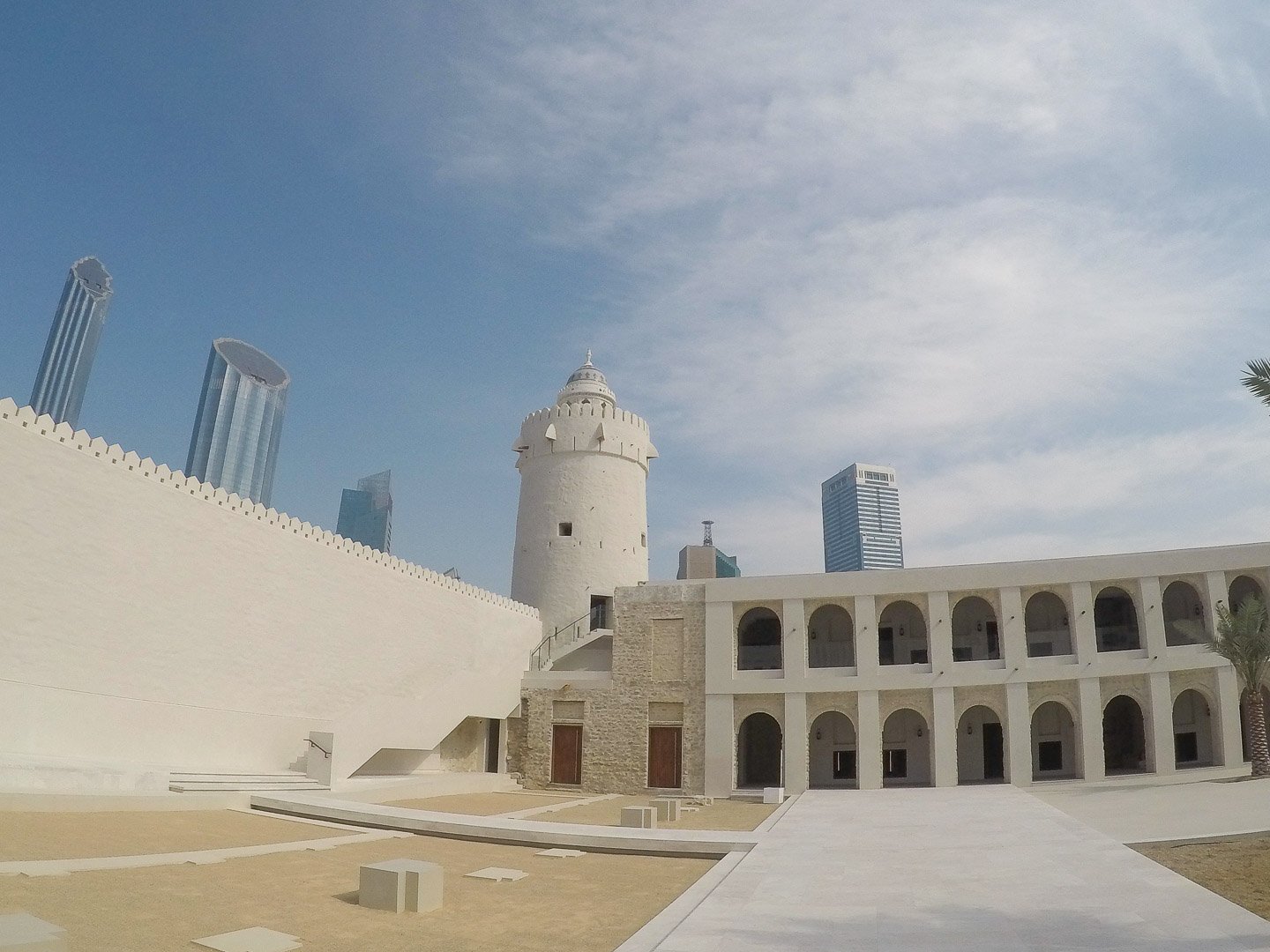 Seven things to do on Yas Island